TABERNACLE PRAYER: how, why and location 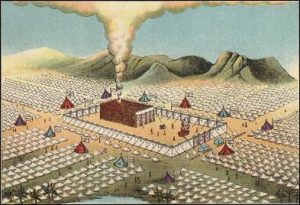 History of Tabernacle Prayer
Over 50 years ago, Dr. Yongghi Cho was praying before he was to start teaching at a pastors’ conference in the country of Formosa.  As he was praying, the Lord revealed the Tabernacle to him in a way he never saw before.  The Lord showed him how to use the Tabernacle as a prayer pattern or a prayer model.  Dr. Cho then began praying the way he heard and saw.  He said his whole prayer life dramatically changed.  He prays 3-5 hours a day and has seen many marvelous answers to prayer.  Today he’s now retired, but for most of his ministry he founded and pastored the world’s largest church in South Korea.  Yoido Full Gospel Church has a membership of over 4 million meeting in over 20 satellite churches, 160 branch churches, and over 300 prayer houses.  Dr. Cho attributes almost all of this to prayer, especially the “Tabernacle” format of prayer.

The God we serve is a specific God.  The Lord has a specific plan to reveal Himself.  Through studying and praying through the Tabernacle, we gain a more comprehensive understanding on the character and nature of God, and how we can enter more fully into intimacy within His Presence.  What the Lord is revealing to us is that the Tabernacle, this original House of Prayer should be studied further.  We at House of Good Hope are called by the Lord to use this as our prayer model as we spend time in prayer.

Overview of the Tabernacle

See where it is positioned:
The location on where the Lord called the Tabernacle to be positioned was right in the middle of the camp with the children of Israel surrounding it.

In other pagan cultures, their temples or places of worship was at a distance from where they lived.  Some have household gods, but they were always in a separate place, they were “venerated”.   The whole perspective was the people had to go “up” to a high and holy, unreachable god.  But our Lord from the very beginning wants to dwell among us!

Jesus, God in the 2nd Person, set aside His divinity and He dwelt among us…..He TABERNACLED with us.

The Lord is in the MIDST of us!  The Lord desires to be involved in our everyday lives.  He’s here with us, every day of the week, every moment of the day.  We don’t just meet with the Lord periodically, whether its once a week in our houses of worship or in our daily devotional times.  He is Yahweh Shammah:  the God Who is there.  He dwells among us, the Lord has His “tent” set up right next to ours.  He wants intimate relationship with us, 24/7.  He is LORD and He is not about to be “shoved into a box”.  He is God of our everyday, not just our spiritual lives.

I marvel at how specific the Lord is as I look on the setting of the Tabernacle location.

LOCATION OF TRIBES
The Lord has been talking to us at House of Good Hope about DIVINE ORDER.  The Lord positions each of us exactly where He wants us to be.  The positions we hold, whether we are high level leaders or we hold what we consider “low-level jobs”; we are there exactly at that moment in time according to the Lord’s specific agenda.  If we are “smack-dab in the center of God’s will”, the Lord positions us to places where we could potentially be extremely powerful and effective.  The Lord can (and does) anoint our words that can potentially be flaming arrows piercing the hearts of those around us…..if we are in the center of God’s will.  It doesn’t matter where we are or what kind of job we hold.  All we are called to do is yield ourselves to the Lord Jesus and allow HIM to position us exactly where we are called to be.

Every person who was part of Israel was strategically placed in exactly the right place where the Lord called them to be.  If they weren’t, they were immediately eliminated.  (Korah).  The children of Israel were separated by tribes and they camped around the Tabernacle in 4 specific locations according to the Lord, 3 tribes on each side.  The location of each tribe was specifically chosen by God. All of this paints a picture of heaven.

The Tabernacle is God’s design for HIS House of Prayer and each person in HIS house was was called to live in a specific location, wherever they camped.

The Lord chose heads for each grouping of 3 tribes: Judah on the east, Benjamin on the west, Reuben on the north, and Dan on the south.  Interesting how their tribes played out over the years.  A son of Judah became king and his children inherited the dynasty, with Jesus born into the tribe of Judah.  Benjamin were the only tribes that survived, the other 10 were lost.  Saul, Israel’s first king was from the tribe of Benjamin.  Also, their flags or banners, as they flew over their camps, were visions that both Ezekiel and John saw when they were translated into heaven: Ox, Lion, Eagle, and Man.

What does all that mean?

What does Heaven look like?
Is the a portrayal of the Tabernacle is the portrayal of positions in heaven?  I have a sense this is a picture of what goes on in heaven: The Throne of God in the middle with His people camped out surrounding Him.

Construction of the tabernacle
the tabernacle was constructed by two different workman. They were anointed and filled with the Holy Spirit, the first one ever mentioned in the Bible who were filled with the Holy Spirit. The names of these two workmen are found in Exodus 31:1-6. The names of the two workmen were Bezalel and Oholiab. Bezalal means in the shadow of God or God is my protection. Oholiab Means tabernacle or 10th of my father.  Ahisamach means brother becomes the habitation of God by the Spirit of God.

Bezalel what is the third generation down from HUR, Who came out of Egypt. If you remember, Hur held Moses’ hands up when Joshua was fighting against their enemies. He was from the tribe of Judah which means praise the measurements of the tabernacle.

There is a “Law of First Mention” in the Bible, which I believe in.  This is the first time mentioned in the Bible of anyone being “filled with the Spirit”.  Bezalel & Aholiab were master craftsmen the Lord put in charge of building the Tabernacle.  These men were handpicked by God to build the Tabernacle, it was given to no one else.  He who the Lord calls, the Lord equips.  These men were equipped through the infilling of Holy Spirit: the Ruach haKodesh.

BEZALEL: the name means “in the shadow of God”, or “God is my provision”.  Bezalel was a descendent of Hur, the 3rd generation down.  Hur was the first generation man who came out of Egypt, one of the men who held Moses’ arms up during the battle Joshua and the children of Israel fought against the Amelekites..  Exodus 17:12.  Hur, and Bezalel were from the tribe of Judah (Praise).

AHOLIAB: His name means “Tabernacle or Tent of my Father”.  His father’s name was Ahisamach from the tribe of Dan. Ahisamach means “brother of strength”.

THE UNIQUE GIFTINGS OF AHOLIAB

1.) He was spiritually sensitive to God and responded heartily to the Lord’s call.

2.) Aholiab was called of God to be a “master builder.” He was a designer or “inventer of designs” able to perform every kind of work.

3.) Even as the Lord called or chose Moses and Aaron for the work that they did. God selects men and women to be artisans, or craftsmen or craftswomen for His specific purpose. 4.) Aholiab was both a faber, a master in metal, stone, and woodwork. Because God does not use the general term for “mason,” here, it appears that the reference to stone carving is more to the specialized work, such as that of the breastplate of the High Priest. The Tabernacle, Hebrew “ohel, tent; ‘ohel mo’ed, tent of meeting; ‘ohel ha-‘eduth, tent of the testimony; mishkan, dwelling; mishkan ha- ‘eduth, dwelling of the testimony; mishkan ‘ohel, dwelling of the tent,” was made in such a way that it was a portable sanctuary, which could be moved as the Israelites traveled, with the entrances being made of linen.  (Aholiab was a man known of God)

1.) The Lord knows the heart of every man, woman and child. God called him Aholiab by name. He knows where you live and work, just as Yeshua appeared in Acts 9 to instruct Saul of Tarsus to go to Strait Street to the house of a tanner. Aholiab was a sanctified man, consecrated to the work of the Lord, and the Spirit of God came upon both him and Bezalel. Consecrated men are not to be left to themselves, to labor in the ability that they have within themselves or to act out of their own ideas and personal dictates. The Spirit of God came upon him. Why? There was a God given pattern to be carried out. Even the most devoted people, devoted to the cause of Yeshua haMashiach/Jesus Christ cannot do the Lord’s work out of themselves, without the moment by moment anointing of the Spirit of the Lord. Each facet of our lives in the Lord are just that strategic.

The colorful Door or Gate attracts us to come in, and there is only one Door we can enter in.  There’s no back door, no side door.  We can’t dig under the fence.  There is only one way in and one way out: through the Gate that faces east.

The Gate faces east, where the sun rises. Also, no matter where you were in the camp, you could see, possibly even smell the Shekinah Glory that was released from the Holy of Holies. Exodus 13:21 “And the LORD went before them by day in a pillar of cloud to lead them along the way, and by night in a pillar of fire to give them light, that they might travel by day and by night”. This describes the Shekinah.  It was there before the Tabernacle was built, but when Moses gave the blueprint for the Tabernacle to be built, the Shekinah dwelt there.

Exodus 40:34 “Then the cloud covered the Tent of Meeting, and the Glory of the LORD filled the Tabernacle.”

You have Successfully Subscribed!